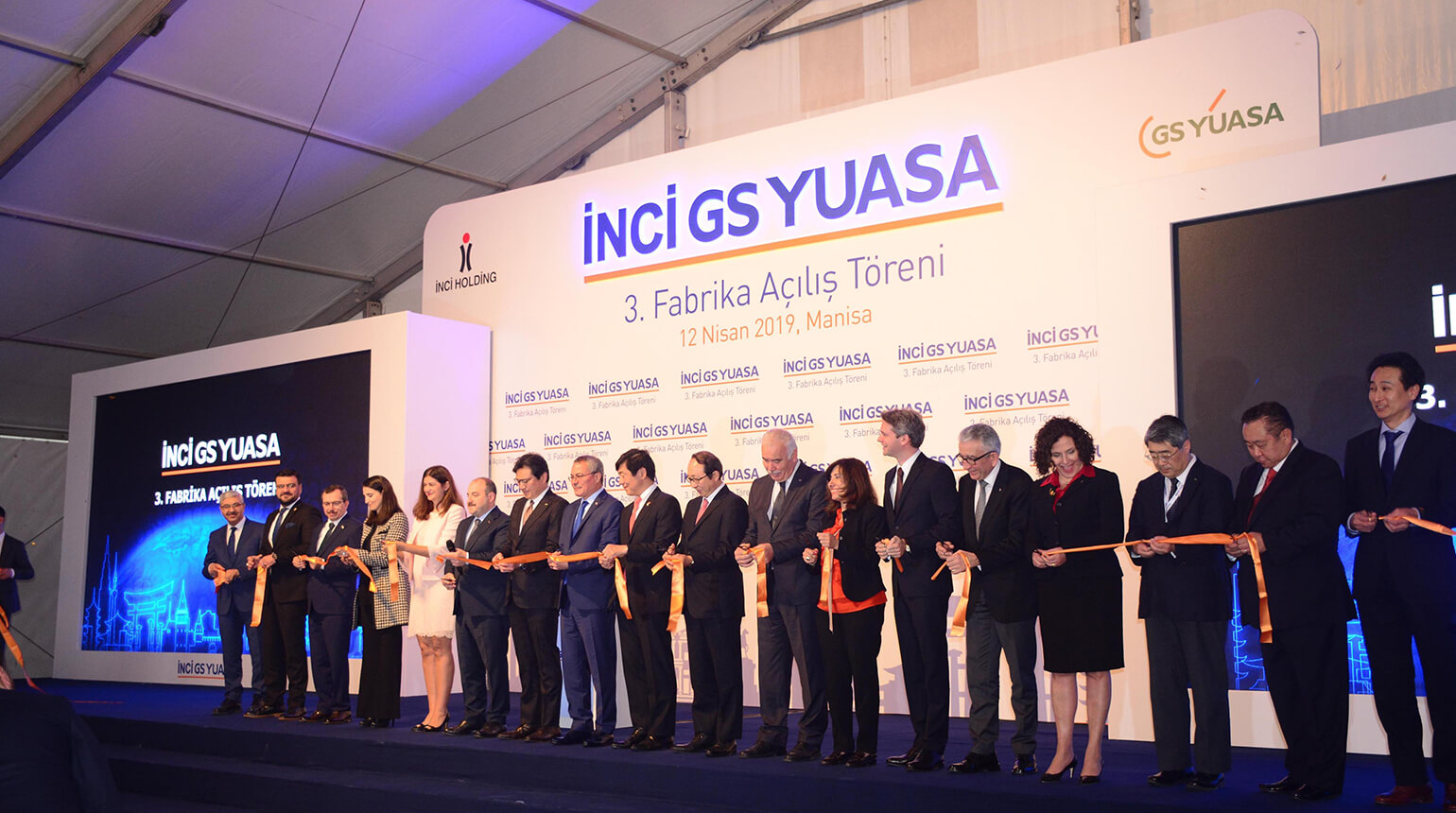 New factory by Turkish-Japanese partnership in the Aegean

İnci GS Yuasa, the association of İnci Holding that is a rooted Turkish company of automotive supply industry and Japanese GS Yuasa that is the work battery leader operationalized its third factory in Manisa in the forty year of their partnership with a 120 million TL of investment. Reaching its 250 million TL of investment goal determined for the first 5 years of partnership in the fourth year, the company increased its closed production area to 47 thousand square meters and automotive battery production capacity to 7 million units per year.

İnci GS Yuasa, the association of İnci Holding and GS Yuasa opened its new battery factory. The giant factory foundation of which was laid in Manisa Organized Industrial Zone in September 2017 and built in a totally 98 thousand square meters of area including 18 thousand square meters of closed area was operationalized with a 120 million TL of investment. With this investment, İnci GS Yuasa reached 47 thousand square meters in total closed production area with an 63 percent of increase and increased its 5-million annual automotive battery production capacity to 7 million units. Producing the 50 millionth batteries within 34 years, İnci GS Yuasa exports about 60 percent of its batteries produced in Turkey to more than 80 countries in 6 continents. In its new factory, İnci GS Yuasa produces advanced-technology start-stop vehicle batteries and new-generation batteries for automotive main industry suppliers at the highest standards.

İnci GS Yuasa, which will increase its contribution to regional employment at 25 percent with commissioning of the new factory with full capacity has reached 250 million TL of investment amount aimed to achieve within the first five years of partnership in the fourth year.

Mustafa Varank, Minister of Industry and Technology participated at the ceremony and said that the third battery factory of İnci GS Yuasa is one of the most remarkable examples of Turkish-Japanese cooperation. Mr. Varank said: “Our friendship with Japan goes back many years. We are consolidating this friendship with production, investment and trade”. Mr. Varank explained the importance of this new factory established with Turkish-Japanese partnership: “Advanced-technology vehicle batteries and new-generation batteries at the highest standard for automotive main industry suppliers will be produced here. It is planned to export 60 percent of total production to the abroad. We wish such investments increase in terms of technology intensity in production and foreign trade size that of. To achieve this, we continue to support investors and producers effectively. İnci GS Yuasa is one of the companies that utilize these opportunities. This place has been hosting the first R&D center of battery sector for 10 years. It cooperates with universities and NGOs and turns innovative ideas into competitive products with high added value. We expect from our industrialist friends to evaluate our incentives in this way and focus on production and employment. Everyone whether citizen or foreigner that makes production in our country is important to us and utilizes all opportunities equally. Because, everyone producing in Turkey is local to us. As Turkey, our route is production with added value and qualified employment. We will take our steps and produce policies to achieve this goal”.

Neşe Gök: We are on the road to be a world brand

Speaking at the opening ceremony of factory, Neşe Gök, Chairperson of İnci Holding Board of Directors reminded the fourth year of two rooted companies from Turkey and Japan and said: “We stand here as the representatives of two leader companies roots of which dates back to history and branches of which reaches out the future. I believe what are the most important things that brought us here as hand-to-hand and shoulder-to-shoulder are our experiences and values”.

Ms. Gök said that this factory is the proof of sustainable cooperation between two countries. Ms. Gök said: “We loved producing and knew to put stone over stone in Aegean, Turkey. We made ourselves responsible for gaining from these territories and investing in them. Today, we take the pride to export our batteries and wheel rims produced in Manisa to more than 100 countries in 6 continents”.

Osamu Murao: We are at world’s service

Osamu Murao, Chairperson of GS Yuasa said that they are proud of presenting a brand-new investment in Turkey to serve the world. Stating that they have been working with İnci Holding, their Turkish partner for four years in a close relationship with common synergy, Mr. Murao said: “I am sure that we will get great success with skills of all İnci GS Yuasa employees with ‘innovation and growth’ philosophy of GS Yuasa".

Cihan Elbirlik: We will determine the future of energy storage sector

Having hosted Turkish and Japanese guests, Cihan Elbirlik, Executive Board Director of İnci GS Yuasa said: “New investment made in partnership of İnci Holding, which is one of the rooted companies of Turkey and GS Yuasa, the Japanese battery leader which has a centuries-old experience means so much. What is more important, we will determine the future of energy storage sector with the most technological factory of our sector that we have opened today. Our company that is the technology leader of the sector will follow trends closely as in the past and represent our country in the world league”.

“We work so hard to deserve our title as energy leader of the world, develop our culture everyday thanks to our partnership, learn new things, multiply our values and grow together. Today, we export 60 percent of our batteries that we produce as İnci GS Yuasa to more than 80 countries of the world. We have increased our annual production capacity from 5 million to 7 million with our new factory established with 120 million TL of investment. When our factory is commissioned with full capacity, our contribute to the regional employment will increase at 25 percent. In our new factory, we will produce advanced-technology start-stop vehicle batteries and new-generation batteries for automotive main industry suppliers at the highest standards and enlighten the future of the sector.”

After his speech, Minister Mr. Varank wished fruitful gainings for Turkish and Japanese partners and cut the ribbon. Neşe Gök, Chairperson of İnci Holding Board of Directors and Osamu Murao, Chairperson of GS Yuasa planted an olive three and cherry blossom to garden of the factory to represent friendship and peace.